Skip to Content
Home / Business / Is Vaping With No Nicotine Enough to Quit Smoking?

What does it take to finally quit smoking? Long-term smokers have often used various methods to try and kick the bad habit. These methods often include going cold turkey on smoking, using nicotine replacements, or taking certain medications that supposedly help stop smoking.

But what about vaping? It’s been said that for smokers who’ve long been wanting to quit, deciding to vape with no nicotine is actually a good way to slowly wean off of cigarettes.

On the surface, vaping seems quite similar to smoking cigarettes. However, e-cigarettes do not burn tobacco nor produce tar or carbon monoxide–which are two of the most dangerous elements involved in smoking tobacco.

For many, vaping has indeed helped them quit smoking. But is it enough to really get one to finally quit tobacco and nicotine?

The Risks of Smoking Tobacco

We’re all familiar with the risks and dangers associated with smoking tobacco, with lung cancer being the primary danger. In fact, did you know that smoking causes about 30% of all cancer-related deaths in the United States? Cigarette smoking also brings with it many other risks and dangers, including heart disease, diabetes, dental problems, hearing and vision loss, fertility problems, and osteoporosis.

And even if you’re lucky enough to not run into some or all of these problems, there’s still the fact that the smell of cigarettes can stick to your skin, your hair, your clothes, and even your entire home.

It’s because of all these risks that more and more of those in the younger generation have started taking up vaping instead.

Nicotine-free Vaping Is Not Addicting

It was in 1988 that the U.S. Surgeon General deemed smoking as an addiction caused primarily by nicotine. Nicotine is considered a mild stimulant that, when it binds to receptors in the brain, it releases dopamine.

Dopamine is a type of neurotransmitter that plays a big part in our ability to think and plan. It also plays a role in surfacing feelings of pleasure. This release of dopamine in our brains is what makes nicotine addictive.

If you were to eliminate the nicotine element, however, and choose to vape with no nicotine, then the addictive factor is also eliminated. This makes vaping a viable option for those that enjoy the socializing aspect that used to come with smoking. In fact, a 2019 study found that 19% of participants that used e-cigarettes had stopped smoking a year later, compared to only 9% quitters that used nicotine patches and gum instead.

Of course, the addictive nature of nicotine can be a deterrent to you completely quitting. While vaping does give you more control over the amount of nicotine you intake, there are other factors at play that will help you completely say goodbye to that nicotine addiction.

1. Begin With The Right Mindset

The first step to accomplishing anything is having the right mindset. One of the things that can spell one’s defeat before they even get started is the belief that quitting is either too difficult, or completely impossible. This sets most people up for failure.

Instead, try to form the right mindset towards quitting smoking. The best way to do this is to figure out why you’re quitting in the first place. Because when the road gets rough, you need a strong motivation to help you keep going. Finding your why certainly helps with that.

Are you quitting because you want to live long enough to meet and see your grandchildren grow up? Or maybe you’ve just had a new baby and you don’t want them to be burdened with second-hand smoke. Whatever the reason, find the one that resonates with you the most, and hold that in your heart throughout your path towards a tobacco-free life.

2. Get An Accountability Buddy

There’s a reason why groups like Alcoholics Anonymous are successful. It’s because the people in the program make themselves accountable to their peers and sponsors. Regular check-ins are done to help them cope with and deal with their struggles, and people are always open to lend an ear whenever the going gets tough.

In the same way, finding someone you can trust to keep you out of harm’s way will dramatically increase your chances of success. Find that someone. It doesn’t necessarily have to be your spouse, if you’re married. It can be a close friend who’ll commit to checking up on you and keeping you away from the edge.

3. Find a Replacement Habit or Hobby

Lastly, because the pleasure receptor, dopamine, is directly involved with the nicotine addiction, find yourself another activity that can help give you that same dose of dopamine without the negative effects.

Activities like sleep, meditation, exercise, and listening to music are all easy enough replacements to help you scratch that itch.

Where to Find Nicotine-Free Vapes

Because vaping allows you more control over your nicotine intake, you may want to choose to take things slowly. Gradually reducing the amount of nicotine you intake, while at the same time replacing your dependence on it with exercise or meditation can help you finally say goodbye to smoking. Cyclone Pods has an excellent selection of devices and pod flavors to help you vape with no nicotine. Check out their Thunder system and their Gust disposable devices online, on their website. 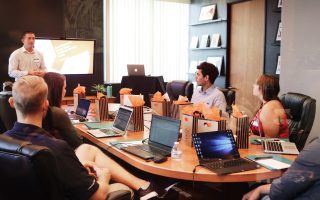